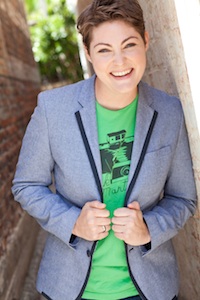 Shannon MacMillan is a multifaceted performer and theater director currently living in Los Angeles. Shannon recently returned to LA after spending many years on the East coast. In New York, she worked with such companies as Theater for the New City, Mabou Mines, 20% Theater, The Queen’s Company, and others.

A member of the SAG-AFTRA, Shannon can be seen in a number of films, and is featured in the Russell Crowe flick Tenderness, directed by John Polson. She can also be seen in a number of independent and student films, and has been viewed over 10 million times (literally) in the video of Latin pop superstar Marco Antonio Solis’ single A Donde Vamos A Parar.  Additionally, she has been seen on the LA stage as a lead puppeteer with the Rogue Artists Ensemble, as Skip “the Lesbian Carnie” at Sacred Fools, and she has several physical/clown pieces in development for future production.

Shannon holds a B.A. in Theatre from Smith College and completed the Professional Training Program at the Dell’Arte International School for Physical Theater in Blue Lake, CA. She is generally awesome to work with (true story) and loves tea, her puppy Leopold, and her neighborhood (Silver Lake).